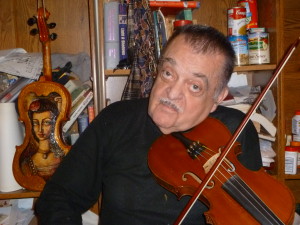 Jovan grew up in Beograd, the capital of Serbia, where he experienced Nazi occupation and saw his family dispossessed by Communism. Jovan demonstrated a passionate artistic impulse from a young age, when he began painting, writing, and playing violin. He studied at the Beograd Theater Academy, worked as a playwright in Yugoslavia, and traveled Western Europe as a musician before immigrating to Sweden, Canada, and finally to the US in 1971. He has been a prolific member of Chicago’s artistic community for four decades, as a painter, author and musician. Jovan’s stories, musical knowledge, and artistic exuberance provided the initial inspiration for the Chicago Folklore Ensemble. Jovan is featured in Chicago Folklore Ensemble’s show, album, and book entitled The World in Chicago. 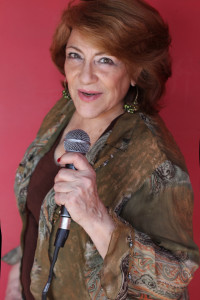 Alba grew up in Buenos Aires, the city to which both her parents immigrated from Galicia, Spain. She showed passion for music at an early age, singing with her family and at school. As a young woman, she took voice lessons and performed in singing contests and radio programs. She first moved to Chicago in 1969, then lived in Canada, Ecuador, and Buenos Aires, and returned again to Chicago in 1978. Alba worked in real estate for many years, and began singing professionally in 1989. She is an accomplished actor, and has performed in several Spanish language plays at Chicago’s Aguijón Theater. Alba is featured in Chicago Folklore Ensemble’s show, album, and book entitled The World in Chicago. 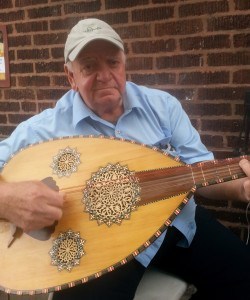 Baha’a grew up in Amman, Jordan. His parents were Muslim Palestinians from the cosmopolitan seacoast town of Jaffa, where the family had lived for generations. In 1948, his immediate family moved to Jordan as refugees. In Amman, Baha’a’s father built a prosperous business, and all eight children became educated professionals. Baha’a began singing as a young child. He started acting when he was in high school, and studied theater and video production in college. He taught himself to play oud, the Arabic lute, when he was 26. He worked in theater and television for years, before moving to Chicago to pursue a master’s degree in theater at the University of Illinois. After graduating, Baha’a stayed in Chicago, where he performed music in nightclubs and worked a variety of jobs, including interior designer, chef, and vice president of a shampoo company. Baha’a is also an inventor, a composer, a music teacher, and an instrument maker. Baha’a is featured in Chicago Folklore Ensemble’s show Where Rivers Meet as well as the show, album, and book entitled The World in Chicago. 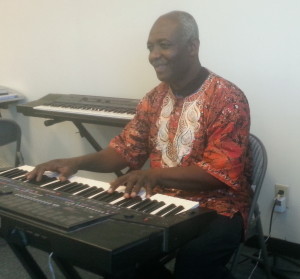 Abee Mensah grew up in the Central and Western Regions of Ghana. His uncle taught him to play keyboard from the age of ten, and he started touring with Ghanaian highlife bands while still in high school. He became a music producer and started recording for many great artists of Ghanaian palm-wine, highlife, and gospel music. He continued touring and playing in nightclubs in Ghana, and also performed in Ivory Coast and Liberia. Abee came to the Chicago in 1994 to pursue a better education for his four children, and worked a variety of jobs. He played with the Chicago band Ghannata for many years. Now he performs in churches, teaches keyboard classes, and continues to record and produce music in his own studio. Abee is featured in Chicago Folklore Ensemble’s show, album, and book entitled The World in Chicago and also contributed material for Chicago Folklore Ensemble’s kids’ show, Follow the Butterfly. 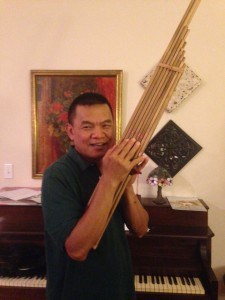 Phiwan grew up in a large family of farmers and craftspeople in Phichit Province, Central Thailand. At a young age he began singing and playing khaen, a mouth organ with bamboo pipes traditionally played by the Lao people of Laos and Northeast Thailand. In Thailand, Phiwan worked as a physical education teacher and school administrator. There he met Colleen Loeffler, a Peace Corps volunteer. Phiwan came to the United States with her in 2000 and they married in 2003. Since moving to the U.S., Phiwan has worked as a massage therapist specializing in traditional Thai bodywork. He is a loving father and an avid cook. Phiwan is featured in Chicago Folklore Ensemble’s show, album, and book entitled The World in Chicago and also contributed material for Chicago Folklore Ensemble’s kids’ show, Follow the Butterfly. 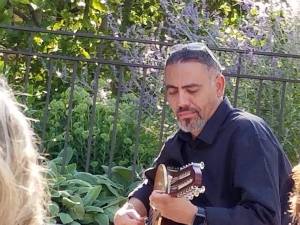 Amro Helmy is a unique and highly talented teacher, singer, and oud player who is a master of a large number of styles using different techniques, approaches, and textures. He began teaching himself to play oud at age 14. After graduating from music college in Cairo, he began a musical career performing with popular singers in Egypt. He taught music in Kuwait for five years, and in 1999, he moved with family to the United States, where he worked a variety of jobs outside of music. In 2011, he began performing again, and since then has composed many original songs and performed in more than a hundred concerts including various interfaith events around the country. Beyond his outstanding onstage performances, he is also a teacher of the musical arts and of Arabic in many schools in Chicago. Amro’s dedication to his craft and his students ensures that quality music will continue to flourish. You can follow Amro on Youtube, Soundcloud, and Patreon. Amro is featured in Chicago Folklore Ensemble’s show Where Rivers Meet. 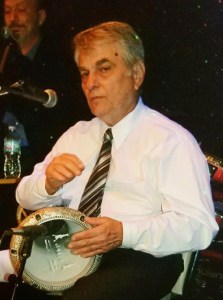 Edward Hanna was born to an Assyrian family in Basra, Iraq. He learned percussion at a young age and traveled throughout Iraq working as a professional musician, playing traditional Middle Eastern music on hand drums as well as Western popular music on drum set. Additionally, he worked as a music teacher and a physical education teacher in Iraq. He moved with his family to Chicago in 1982, where he worked an accountant for 27 years and performed several nights a week in Chicago’s nightclubs. He has accompanied many great singers of Arabic music, including Tony Hanna, Wadi’a Al-Safi, Samira Tawfiq, Kathem Al-Saher, Seta Hagopian, and Fadhil Awad, as well as great Assyrian singers such as Sargon Gabriel, Juliana Jendo, and Linda George. He has also accompanied great instrumentalists, including Kurdish violinist Dilshad Said and Iraqi violinist Ghanim Haddad. Edward is featured in Chicago Folklore Ensemble’s show Where Rivers Meet.

Lucia Thomas (violin, oud, banjo, sitar, vocals) is the artistic director and co-founder of Chicago Folklore Ensemble. She was classically trained at the Lamont School of Music, and now her playing spans a wide range of musical traditions – Arabic, Indian, Balkan, Latin, Jazz, Irish, and American Old-Time. Throughout her art, Lucia aims to bring people together by sharing real stories, beautiful music, and passionate life!

Sam Hyson (violin, accordion) is cofounder and co-director of Chicago Folklore Ensemble. He plays many styles of folk and traditional music from around the world, performing Bengali music with the band Ochin Pakhi, Mexican music with Cielito Lindo Family Folk Music, Arabic and Jewish music with Salaam-Shalom Music Project, Persian music with Shalizar Ensemble, and and a variety of styles with Compass Rose Violin Duo. 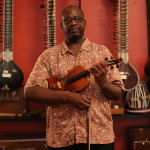 Robert Fisher (viola) attended Illinois State University, New England Conservatory of Music, and Northwestern University. He is a member of the Chicago Sinfonietta and the Joffrey Ballet Pit Orchestra. He started and teaches a successful violin program at the McDade Classical School for kindergarten to 6th grade. He also teaches at Lane Tech College Prep High School. Mr. Fisher is a connoisseur of new music, having over 11 pieces written for him in his personal library. He has given solo world premiere performances at New England Conservatory, Berklee College of Music, Illinois State University, and at every major university in the Chicago area. Mr. Fisher is an authority on African American Music and Musicians and has given clinics and performance in Illinois, Arkansas and Mississippi. 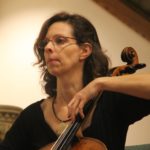 Ellen Frolichstein (cello) performs, records, and teaches, specializing in classical, jazz, and Latin music. Ellen performs with the Lake Effect Ensemble and the Chicago Jazz Philharmonic, and she is on the board of the Evanston In School Music Association (EISMA). She is also the producer of a documentary called The Celiac Project. 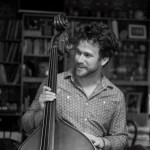 John Sutton (cello) is an accomplished bassist/cellist, composer, and natural storyteller, John has easily transitioned into the world of filmmaking in recent years. He began with co-writing, scoring, and starring in the Bass Solo web series, and is now a script writer and composer for Soft Cage Films. In the past few years, John has written musical scores for dozens of film productions coming out of Chicago’s expanding film community. As an instrumentalist, John has a passion for interpreting the original music of other composers and bandleaders, and performs regularly in different ensembles in and around Chicago, including the Chicago Jazz Philharmonic. 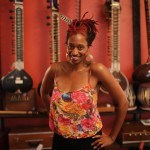 Sojourner Zenobia (storyteller) is an actor, director, vocalist, choreographer, and performance artist. She investigates the arts as a pathway for strengthening relationships with unseen worlds – i.e. ancestors, nature, divine self – as a source of power for personal, social and political movements. She directs and collaborates with multi-talented artists including dancers, actors, installation artists, videographers, vocalists, and instrumentalists. Sojourner intentionally activates spaces of connection and gratitude through monthly meditations she guides for women of color. She is a unique gem in Chicago’s underground performance scene offering her original, spiritually themed productions in non-traditional theatre spaces. She studied interdisciplinary performance and Buddhist studies at Naropa University. 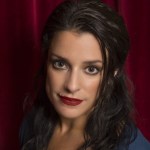 Anita Darwish (storyteller) has been involved in music since her mother started teaching her the recorder at the age of six. She holds a degree in music (saxophone and voice) and a minor in theater. Also a professional Middle Eastern dancer, she has had the pleasure of choreographing for Up and Coming Theatre (American Idiot “Extraordinary Girl”) and Greenman Theatre (Arabian Nights) as well as having been the Musical Director for Quest Theatre Ensemble’s Blue Nativity tour. She is happy to be celebrating her Arab American heritage as narrator in When Rivers Meet.