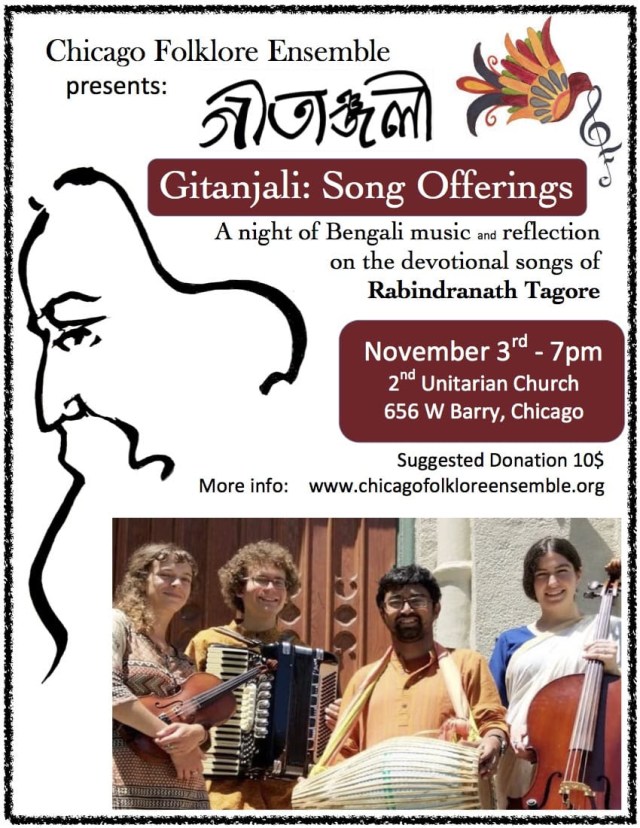 Gitanjali: Song Offerings is a two-hour show that takes audiences on a spiritual journey via the music and poetry of legendary Bengali polymath Rabindranath Tagore. In 1912, Tagore published a book of devotional poems called Gitanjali, and the work was so impactful in Europe that he became the first non-European to win the Nobel Prize for Literature in 1913. However, Western readers of Tagore don’t always know that the poems in Gitanjali were originally lyrics of songs that Tagore composed, songs which are still known and beloved in Bengal today. Gitanjali: Song Offerings presents several poems from Gitanjali paired with the songs sung in the original Bengali, intertwining Tagore’s exquisite verses with the music that brings the poetry its full emotional resonance.

Tagore’s songs were taught to the instrumentalists in the ensemble by Subhajit Sengupta, the founder and lead singer of Chicago’s Bengali folk band Ochin Pakhi. In this show, vocals and narration by Subhajit Sengupta and Swarnali Banerjee, both originally from Kolkata, India, are accompanied by sweeping strings and accordion harmonies. Over the course of the show, the performers share personal experiences that illustrate the enduring power and relevance of Tagore’s creation.